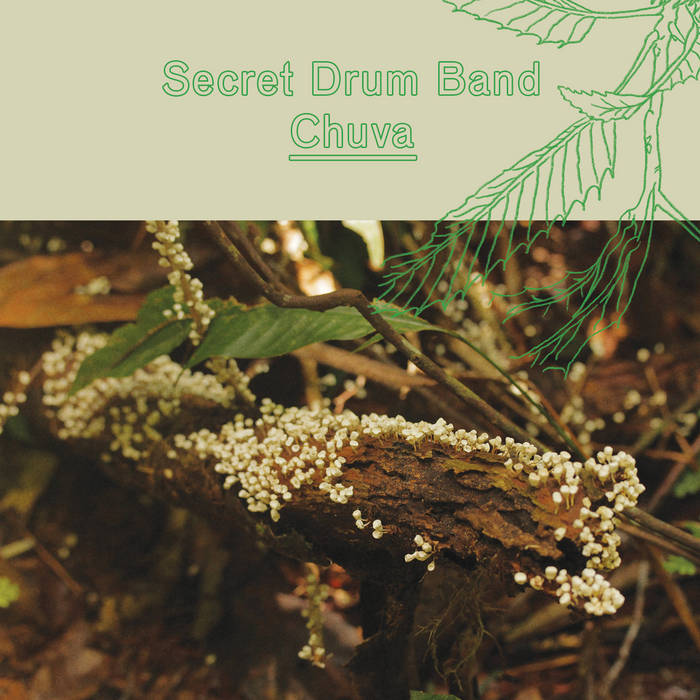 CHUVA is the second full length album from Secret Drum Band. On Chuva SDB combines intricately composed percussion and tonal electronics alongside ecological soundscapes rooted in study and observations from Hawaii, the Brazilian Amazon and Oregon. Through soundscape composition, investigations in acoustic ecology and politically driven percussion, Secret Drum Band brings attention to topics such as insect sentience, our relations with non-human species and how our decisions affect our environment and communities.

1 ANTIFA FUSCHIA (LS, AW, HT)
Based on a lock-groove improvisation between Lisa and Heather, recorded during an alt-right rally (and antifascist response) in Portland, OR. Borne out of anxiety, anger, and the duty of resisting the fascist creep.

3 SURFACE OF THE ABYSS AT DUCKE (LS)
The “abyss,” as imagined by Lisa and colleagues Renata and Laura, is the space through which organic matter cycles from living organisms to soil and back again. This song is based on the dominant, or keynote, sounds of the Ducke Reserve in Amazonas, Brazil, conceptualized as the “surface” of this mysterious abyss, containing the makings of all species.

4 KAʻENA POINT (AW, LS)
Based on the ambient soundscape and a patchwork of low-lying native plants, the elements of this song were composed within this protected habitat in NW Oʻahu, once a stronghold of the Hylaeus bees.

5 MULTISPECIES (ANTS) (LS)
Features recordings of ants native to the Brazilian Amazon: specifically, the stridulation of Atta (leafcutting) and Pheidole species, and locomotion of Eciton army ants. Lisa: “Through amplifying the ants, I hope to bring a shift in humans’ perception of insects.”

7 ROBERT PLANTS (LS)
Composed through a process of observing plant species common to Portland’s Forest Park, and translating those visual impressions into sonic and rhythmic patterns.

8 RIPARIA (AW)
Inspired by the delicate interactional movement of floating plant detritus near the shore of Rooster Rock State Park in the Columbia River Gorge.

9 ANTIFA GREEN (AW, LS, HT, Amenta Abioto)
Conceived on the same day as A.Fuschia, and likewise based on improvisational interplay between Lisa and Heather. Amenta’s vocals add vital motion and color to this sultry piece.

Tracks 2 and 5 are part of The Hylaeus Project, a documentation of the endangered Hawaiian Hylaeus bees and their habitats. Tracks 7 and 8 were commissioned by the Portland chapter of the Oregon Native Plant Society.

Bandcamp Daily  your guide to the world of Bandcamp